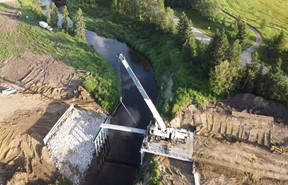 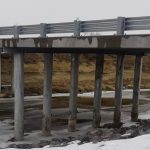 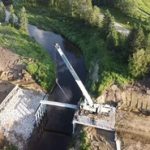 Formula Alberta Ltd was commissioned to construct a new road alignment which included the construction of a 14m-14m-14m Concrete Girder Bridge. The bridge carries the newly aligned Township Rd 414 over Blindman River, near Rimbey, Alberta.

As this project included a new road alignment, traffic was accommodated on the existing road and the existing bridge was demolished last. Formula Alberta first constructed approximately 175m of road on either side of the new bridge location, including the installation of drainage culverts. Once the road was built up enough, bridge construction occurred which included the placement of pipe piles into pre-drilled holes and filling them with concrete. Also included was the construction of SPCS backwalls and steel abutment and pier caps as well as the installation of pier bracing, nose plates and Riprap. 14m girders were erected for each of the three spans then TL-2 Low Height Thrie Beam bridgerail was mounted. Once the new road alignment was completed and guardrail was installed, traffic was moved over. The old bridge structures compromising of a 30.5m long Pony Truss bridge and a 6.1, long timber bridge was then demolished, and a turn around area was created at the end of the old road.

Our formula for success is built on safety, efficiency, and client satisfaction, and has helped build us into one of Alberta’s leading large-scale construction contractors.